Bus ride from Kampala to Jinja

Home/Posts/General, Jinja, Kampala/Bus ride from Kampala to Jinja
Previous Next

Bus ride from Kampala to Jinja

Holidays in Uganda: Bus ride from Kampala to Jinja, east of the capital. Traveling by public transport in East Africa.

Traveling by bus and other public transport in Africa is always an experience and of course a great deal in terms of price. Provided you are willing to forego a little comfort every now and then and you are aware that traveling by bus and train in Africa can sometimes take half an eternity. So did my bus ride from Kampala to Jinja. The city of Jinja is around 100 kilometers east of Kampala. Numerous buses (large coaches and small mini-buses, also called taxi buses) run several times a day between Uganda’s capital Kampala and Jinja in both directions.

For a bus ride from Kampala to Jinja you should plan about 4-5 hours. Travel time varies significantly at times, mainly due to city traffic and congestion on Kampala roads. A ride costs around 5 euros, so absolutely within limits. The coach was of course not exactly the newest model and had apparently had its best days several years ago. But what can I say, the bus did its job that day and brought me safely from Kampala to Jinja. Value for money was right and there was even a TV on the bus. Although the program was really weird. First there were a few music videos and then suddenly the program changed and a horror film was shown.

By the way, on the way back from Jinja to Kampala, I rode in a small mini-bus. Of course, all the seats were occupied and the storage space was filled with bags down to the last centimetre. Load bags and other items. The seating comfort was a little less, the journey time was similar to the outward journey by coach and the journey costs for the journey with the small mini-bus were just under 3 euros. 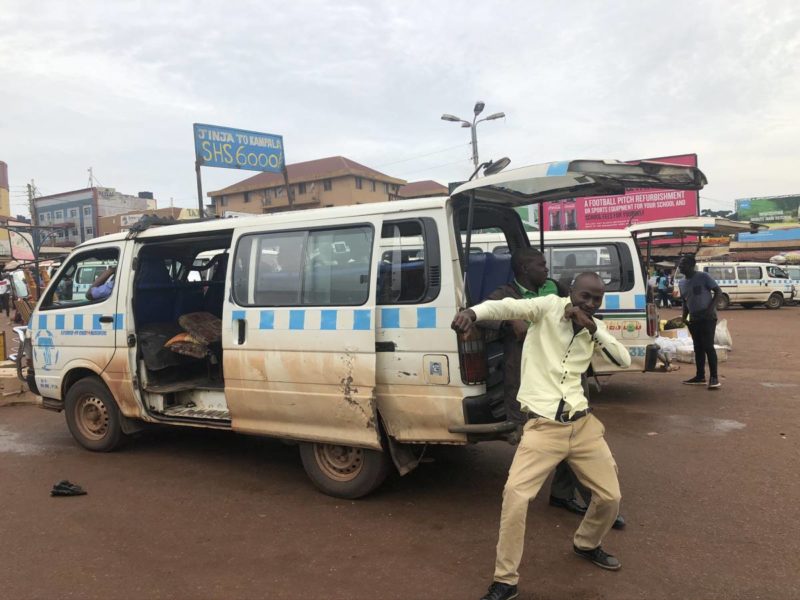 Absolutely worth seeing in Jinja is, for example, the source of the Nile, “The Source of River Nile”. So the place where the Nile leaves Lake Victoria. A few kilometers downstream, about 20 kilometers from Jinja, there are also great rapids, which are very suitable for rafting. There is also bungee jumping in Jinja and much more to discover in and around Jinja.

Videos: By bus from Kampala to Jinja